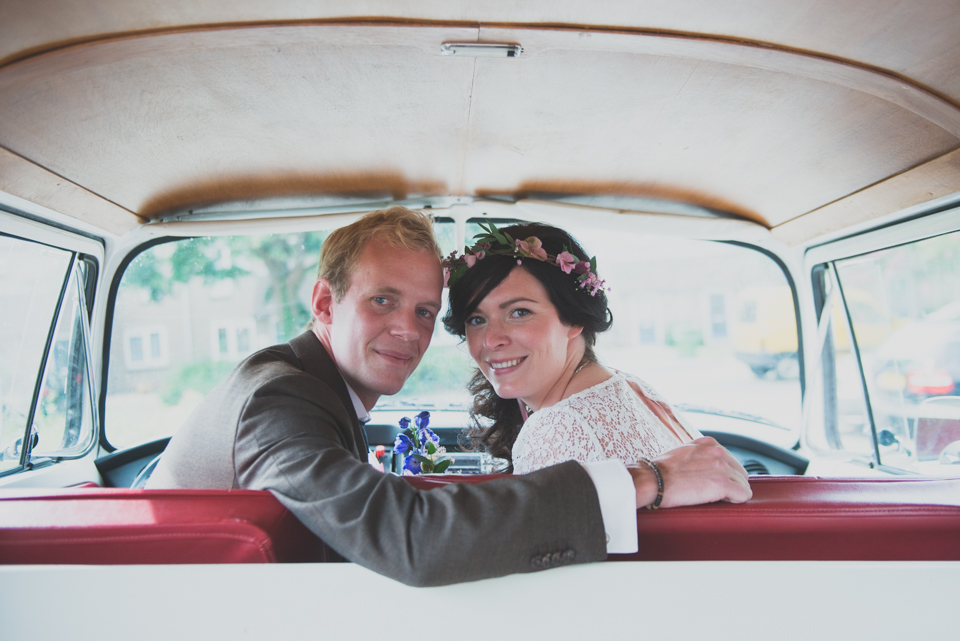 This is an old blogpost, click here to have a look at recent work

Last year we launced a big contest in which a couple could win coverage for their entire wedding day. Anne and Jacob were the lucky winners and last June we photographed their beautifully detailed wedding.

In the morning we started the day in Schoonhoven with the bride and her mother. Anne's hair and make-up was done by Kapsalon Puur and not long after, Jacob came to pick Anne up with a baby blue VW van. I loved that the couple drove themselves the whole day, it gave them some alone time which is something lots of couples miss having on their wedding day. Jacob wore a beautiful brown suit with a vintage touch from Suit Supply and handmade cufflinks with their wedding dates and their initials on it. Anne was trained as a goldsmith and made real one-of-a-kind pieces. Besides the cufflinks she also made their wedding rings herself. They were both made of two colors of gold. But the most awesome part is that her wedding ring secretly is two different rings, so she'll never be bored of her ring.

Anne wore a vintage wedding dress from the 1930s, she went all the way to Laura Dols in Amsterdam for this beauty. They made a couple of adjustments to the dress especially for her, like shorter sleeves and a lower neckline. I know from my own experience that Laura Dols is one of the best when it comes to vintage dresses. So if you're set on a vintage weddingdress be sure to visit them at antieketrouwjurken.nl (although the url is Dutch the website is also available in English).

After getting ready we made a quick stop by Anne's grandmother who wasn't able to attend the wedding itself. After which we did a photo session at a couple of different places. We even went on the ferry that Anne and Jacob had to take ever day when they were still in high school (and yes, they are high school sweet hearts). Then it was time for lunch and the arrival of some close family and friends. After this we walked to the town hall of Ameide, where the ceremony took place.

The heartfelt, humorous and emotional ceremony was led by one of the best civil servants I have ever heard at a wedding ceremony. Esther Pasman is a civil servant for the municipality of Ameide (hurray! she now also works as a BABS) but I'd say she's almost worth it to just move your ceremony to Ameide (I wrote this before she became a BABS, you can now hire her wherever you're getting married). She told the audience about how Jacob feels that 'Anne is someone of whom he can't imagine that anyone has ever said something unkind about'. And at the end Esther had even brought a gift for the bride and the groom. Explaining that although it's nice that Ameide gifts them a present as a couple, she believes that married people are still also two individuals and that is why she also wanted to give something for each of them.

After the ceremony it was time to go to Het Arsenaal in Nieuwpoort for a delicious dinner, some photos with family and friends and ofcourse a party to celebrate their marriage!

Edit 20-06-2016: Woohoo! Good news! Esther Pasman has decided to become a BABS. That means she is available for your wedding wherever in the Netherlands your wedding takes place. When her website becomes available online I'll let you know!